Join us for Day Two of our Heirloom Organics Outdoor Tent Sale on Saturday, May 23nd from 9am until about 4pm. At our tent sale you’ll get the opportunity to check out our excellent products in person, meet some of … END_OF_DOCUMENT_TOKEN_TO_BE_REPLACED

Heirloom Organics is having our first outdoor tent sale! Join us on Friday, May 22nd from 10am until about 4pm. At our tent sale you’ll get the opportunity to check out our excellent products in person, meet some of our … END_OF_DOCUMENT_TOKEN_TO_BE_REPLACED

Guest Blog from: LIA LEENDERTZ at Fix.com Drying Chilies One great way to preserve chili peppers is to dry them out. Drying works best with waxier peppers, and they will stay for years. You can also pickle your peppers, make jellies, and … END_OF_DOCUMENT_TOKEN_TO_BE_REPLACED

Guest Blog from: LIA LEENDERTZ at Fix.com Growing Chilies Chilies are not the easiest plants to grow, but if you can master their cultivation you will have grown a crop that is packed full of flavor and that will improve a wide … END_OF_DOCUMENT_TOKEN_TO_BE_REPLACED

Guest Blog from: LIA LEENDERTZ at Fix.com Chilies make a beautiful and satisfying crop. The colors are stunning: reds, purples, yellows and oranges, and there is a chili to suit every taste, from the delicate and fruity to the heart-stoppingly fiery. You … END_OF_DOCUMENT_TOKEN_TO_BE_REPLACED 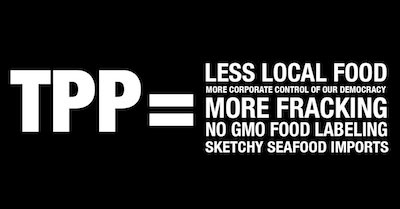 On May 13, 2015 Senate negotiators reached a deal to move forward on so-called “Fast Track” legislation – a bill that would allow the President to send secretly negotiated, industry authored trade deals like the Trans Pacific Partnership (TPP) to Congress for an up or down vote, no amendments allowed. Multinational corporations stand to gain enormous benefits from TPP, which would likely give them incredible power, including the right to sue local governments in international tribunals for democratically-enacted laws, like GMO labeling, that they claim hurt their profits.

There’s a certain kind of satisfaction that comes from maintaining your own herb garden. Aside from the fact that you’ll have basically an endless supply of herbs to cook with, it can be really fun to check in on its growth and see the progress of something you’re caring for every day. Having an herb garden means you can pick whatever types of herbs you want to cook with too!