What’s the difference and what does it matter?

There is a persistent ignorance about these terms that clouds most conversations about them, as well as media presentations that refer to them in regard to important agricultural issues, like feeding the world.

Commercial F1 hybrids are the kind of hybrids for sale to commercial farmers, and this is what is specifically referred to in common discussions of the relative merits of “hybrids vs OPs”. Commercial F1 hybrids have a different breeding process than open-pollinated varieties, with a different intended outcome. In commercial hybrids, all of the breeding work actually goes into the parents of the intended F1 end product. These parent lines are rendered to a specific genetic uniformity by repeated cycles of family inbreeding and selection, until each member of the inbred line is nearly like a clone, its genetic variability eliminated in hope of creating only ideal F1 offspring, once it has been crossed with an equally rendered mating line. One of these inbred lines is the designated maternal line, on which the F1 commercial hybrid seed will set and grow. This maternal line is bred (or chemically manipulated) to lack viable pollen, creating a “male-sterile” recipient for pollination by the male or paternal line. Commercial F1 hybrid seed is intended to produce one crop of genetically uniform offspring. Seed from hybrids doesn’t produce uniform “hybrid-like” offspring.

Hybrids, as a general term, are created in nature and in breeding projects whenever unlike kinds, varieties, or species successfully inter-mate. The hybrid itself (the F1 generation) is a “genetic average” of the parents that created it, and they generally look that way. When the hybrids have offspring (the F2 generation), they don’t resemble the hybrid as much as they represent a reassembly of traits from the original parents of the hybrid, including some traits that were previously invisible because they are genetically recessive. F2 generations provides a plant breeder with a first opportunity to see some of the varietal possibilities that lie in the future, following many generations of genetic sorting (called “segregation”) and selection by the breeder and the environment. At the end of 6 to 10 generations of breeding “like kinds to like kinds”, varietal families of kinds become genetically stable, and will “breed true” to the type. Each kind is now an open pollinated variety, with more or less genetic uniformity, depending upon the specifics of its selection.

This is where all open-pollinating varieties come from—new, heirloom, commercial, organic. Except for rare mutations, all the diversity we see in our cornucopia has arisen from the commingling of an everevolving array of varieties under differentand changing conditions. OP varieties are uniform enough to be clearly recognizable, but contain enough genetic diversity to maintain vigorous growth and adaptability under changeable conditions. Conversely, inbred parent lines easily fail when conditions don’t suit them, and hybrids do not adapt to changing conditions. Such are consequences of the difference in F1s vs OPs. 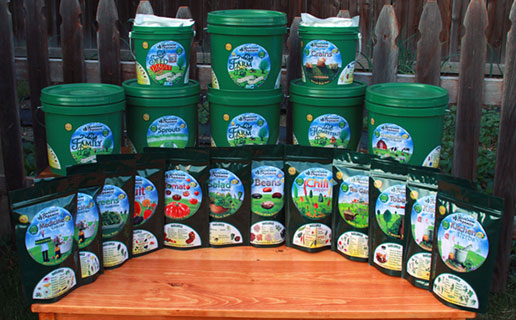 One thought on “Definitions and Consequences: Hybrids, GMOs, and Open-Pollinated Varieties”